What is Yttrium-90 Resin Microsphere?

Unlike traditional open surgery, yttrium 90 resin microspheres SIRT treatment requires only a small opening in the patient’s body, and then yttrium 90 polystyrene-divinylbenzene microspheres are injected into the cancerous site through a special microcatheter to kill cancerous cells directly. The wound is small and the operation process is simple. Therefore, the whole operation can be completed in only one hour. At the same time, it can also avoid the secondary injury caused by traditional treatment methods to patients. Why can a small polymer resin microsphere play such a big role? 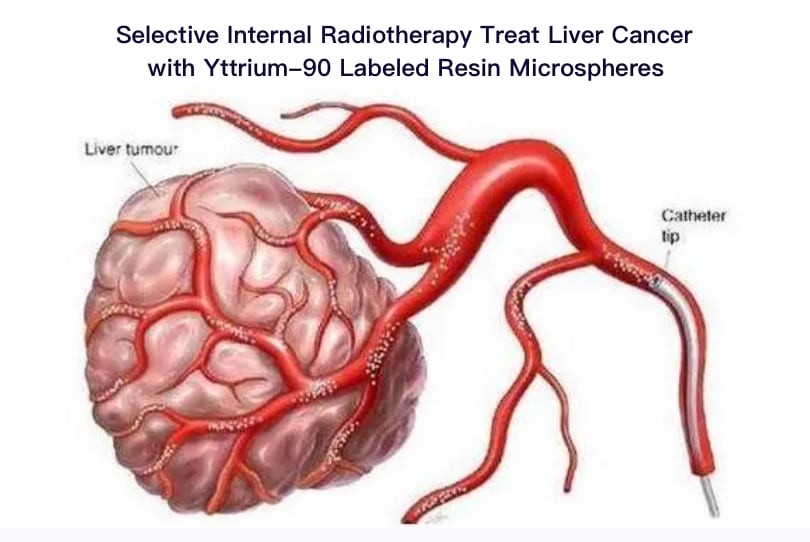 Yttrium 90 is a radioactive substance that can release β Rays. In previous studies, it was found that liver cancer cells are very sensitive to radioactive rays, and >120 units of rays can eliminate the cancer cells, which is also the basic principle of traditional chemotherapy. However, normal liver cells are also very sensitive to radiation. The tolerance dose of normal liver cells is 30 Gy (radiation energy unit), and the dose of killing liver cancer cells is >120 Gy. If undifferentiated radiotherapy is given, normal liver cells will be more damaged. Therefore, traditional chemotherapy will also cause damage to healthy cells during removing cancerous cells and the gain is not worth the loss. Therefore, scientists proposed whether it is possible to let cancerous cells  only receive radiotherapy without damaging healthy liver cells, so Transcatheter Arterial Chemoembolization (TACE) came into being. Our liver has two sets of blood supply systems, namely the portal arteriovenous system and the hepatic arteriovenous system. The hepatic arteriovenous system mainly provides nutrition for liver cancer cells. Therefore, as long as the nutrient transport of hepatic arteriovenous system is blocked, the growth of cancer cells can be prevented.

Therefore, Transcatheter Arterial Chemoembolization (TACE) is to use a special embolic agent to block the artery, so that the cancerous cells will die due to lack of nutrition. However, this kind of surgery has a slow effect, and the cancerous cells will generate a new blood supply system. Therefore, how to accelerate the process of cancer cell necrosis has become a new problem. Therefore, it was proposed that the embolic agent could be replaced with radioactive substances to directly eliminate cancerous cells, which is Selective Internal Radiotherapy (SIRT). The emergence of yttrium 90 has opened a new door to internal radiotherapy. PS/DVB microspheres labeled with  Yttrium 90 selective is a new weapon basing on the technical and theoretical basis of TACE treatment. Doctors send high-dose radioactive polystyrene microsphere into the tumor through micro catheter and give short-range radiation to the tumor. Selective Internal Radiotherapy(SIRT) can not only inhibit tumor, but also avoid the damage of external radiation to adjacent organs. In addition, compared with traditional TACE interventional therapy, this new interventional method has the advantages of wide indications, less complications and high quality of life, so it has attracted attentions of front-line clinicians.

It can gather in the tumor by vascular technology while using resin microspheres to mimic red blood cells.

Yttrium 90 has a short range in the tissue, and the maximum penetration distance in human tissue is 11 mm, which is not easy to spread to other tissues. At the same time, the radiation radius of yttrium 90 is only half of that of cancerous cells, which means that yttrium 90 will not cause damage to surrounding healthy tissues while removing cancer cells. Moreover, yttrium 90 isotope can decay locally, which generally will not spread to the whole body through blood circulation, and the products after decaying will also be discharged out of the body with the normal metabolism of the human body, which will not cause any harm to the human body, so there is no need to isolate after operation.

All these advantages make yttrium 90 the first choice of internal radiotherapy.